When fear is up … markets go down. It really doesn’t matter what the reason for fear, the effect is the same. Past years (2011 & 2012) concerns were Europe (and it will probably be Europe in 2013 again). Currently it is fear of the “fiscal cliff” here in the U.S which is an extension of the debt limit debates. Little has changed in other words. Concern may change to fear.

When fear is up … this old expression is thrown out there by some and is incomplete when stated “There are more sellers than buyers.”

Why? Because each sale requires BOTH a seller AND a buyer. You can not sell financial assets to air or space. There is someone on each end of deal all the time that sets the going price at that time. 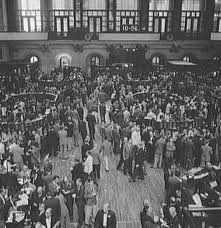 We tend to forget the duality of transactions because today’s deals are done electronically and impersonally rather than over a handshake or face to face like the old days. Even those who used to be on the floor of the exchanges are going away, replaced by electronic transactions.

The photo at right is the NYSE c1955; at top left c1985; middle left c2005; bottom c2011. Notice … the number of people gets less and less! It is easy to forget the human element these days. Indeed, not only our business interactions, even our social interactions have been reduced to electronics as well. 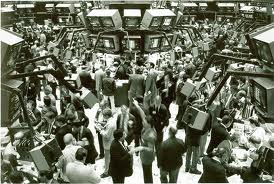 A more complete expression of this sentiment is “There are more sellers willing to sell at a lower price than buyers willing to buy at a higher price.” This means the buyer will not accept a higher offer that the seller wishes they could get. The seller has to keep lowering their price to a point the buyer will buy. We don’t see this because we don’t see the bid price and the ask price, both of which are still part of selling and buying through exchanges. What is actually happening is easy to forget when you sit in front of a computer entering numbers without realizing what goes on behind the scenes between those who own what is sold and those buying it.

Naturally, the seller always wants a high price and the buyer always wants a low price. So expectations about the future is what moves prices up or down. The opposite of the above expression occurs when moods are optimistic. The seller may raise their price and the buyer is willing to buy it at a higher price because the buyer’s expectation is that they too can raise the price and make a profit (Greater Fool Theory). What is the purpose of investing?

Is it to make money (note: the goal posts keep getting moved under that metric of success)? I submit, that because people will rely on their portfolios the rest of their lives in retirement, the purpose is much more important than that. See this blog for the answer…

PS. Declines and their definitions:  Market declines in general to 5% are considered ”noise,” 5 to 10% are called ”dips,” and your emotions may be getting the best of you over noise and dips … (10 -15% are considered ”moderate corrections,”  15-20% are “severe corrections,” and over 20% is called a “bear market”). Bull and Bear Markets are defined as general market trends either up or down. Funny, nobody gets concerned when things seem to be going well (that’s when bubbles start).

This expression of more sellers than buyers is often heard when markets fall. Now you may understand it is an expression with little basis in fact and more based on emotion. What it generally means is that now people are willing to sell at a lower price because they fear they won’t get more later.

More on panic and current events.

behavior management, how much do I need to retire, investment philosophy, outlving resources

Replacing lost income … how?
The Benefits of working with a Registered Investment Adviser (RIA)