WOW! The DOW “plunged*” 602.12 points on the 12th of Nov 2018! (at the time I write this) That translates to JUST 2.32% down from the previous market close. So … not so wow after all. Here’s what I mean … you need to begin thinking in terms of percentages, not points, when the DOW is a large number like it is now. 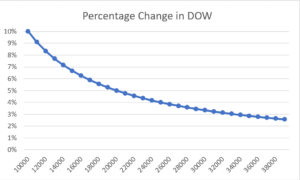 When the DOW is moving up

Note that most of the moves have had the DOW in “Noise,” or “Normal” ranges relative to the most recent DOW record high. People are panicking on normal markets? Because, they’re reacting emotionally rather than stepping back to see the larger picture. 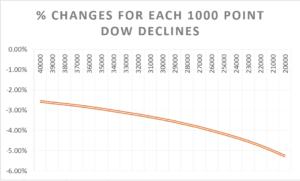 When the DOW is moving down

In both graphs reading from left to right, the percentage change represents each 1,000-point change relative to the prior DOW value; the first graph is the DOW growing, and the second graph (here on the right – please click on it to enlarge) is the DOW declining. In both graphs, the larger the DOW, the smaller the percentage change – even though in all cases what is shown as a percentage is a 1,000 point move between DOW values.*

In other words, the higher the markets go, the LARGER THE POINT CHANGES would be and still be considered “noise” or “normal” market moves.

So, you can’t base your emotions on point moves anymore. Those point moves will be bigger and bigger as markets move into higher ground. And then, many say, markets can’t go that high. If that would be true, then markets should not expect any more growth. If that were true, why would buyers buy? They expect gains which can only come from future gains. Yet they still are buying. Who are they buying from? The sellers! Sellers who believe markets can’t go any higher in the future (ever).

Moral of the story?

Big point moves? Ho-hum. The question is – where is the market relative to it’s most recent record high? This question refers to the decline definition chart above.**

What should you do?

Yes, markets go up and down. You shouldn’t be invested in any of them if you need the money for something soon. All the markets are for longer term needs. Long term means the rest of your life.

Better to understand the relationship between risk and return, since they go hand in hand. You can dial in your EXPOSURE to volatility of your portfolio values by understanding what provides a shock absorber for the markets. That tends to be flight to quality and safety which generally comes from short term bonds.

Point moves stoke your emotions more than they should. You should NOT watch your values daily. Rather, you should step back and look at the PERCENTAGE change over longer periods of time. You won’t get a sense of trends unless you look at 5, or even better, 10-year periods. This will give you a longer-term perspective which is what you need when thinking about long term money needs.

Your retirement plan should have a process to handle market declines because they always happen. Think about how many times the markets went down a lot during your working years. Can you expect those market movements to end when you retire? And there will probably be as many market declines in your retired life as there were in your working life. There are well researched PROCESSES to manage money in the markets during retirement.

PS. The above discusses how to embrace risk rationally and prudently. If you’re invested in any of the markets, you need to expect downs with the ups. Some product manufacturers sell products that don’t go down – because they hide that from you and charge you fees to do that (hidden fees in the form of capping your gains and/or limiting your participation in market movements is some form or fashion). You can transfer risk via products, or embrace risk by limiting your exposure to more volatile asset classes via processes.

Note 1: The DOW, like all other indices, are unmanaged baskets of securities and are not available for direct investment. Past markets do not guarantee future markets.

*Numerator / Denominator = fraction percentage. As the denominator grows larger, and the numerator stays a constant 1,000, the percentage gets smaller; and vice versa.

**Market definition highs are technically defined as the high within the last 52 week period. Recently the record highs have been within those rolling periods too.

Larry R Frank Sr., MBA, CFP®, is an experienced financial advisor and a published author on Retirement Planning Research. Have a financial question? Click Here to Ask Larry
View all posts by Larry Frank, Sr. →
The Markets: Who Buys When People are Selling?
Different kinds of debt by age – some surprises!