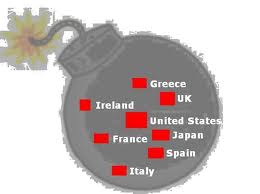 Sovereign debt is debt issued by countries, not companies (which is commercial debt sometimes called private).

The graphic from The Economist “Indulging the NULJ” shows that the US is among countries that will be in this boat on the current budget deficit gap (over spending), as a percentage of GDP, by 2050. The cure, inflate themselves out of the problem since they have their own currencies, is just as bad a cure as cutting government spending.

Another graphic “Dependency Cultures” shows the amount of lending from foreigners (bottom axis) (Germany is a net lender of money, the other countries depend on borrowing), and the interest rates on government bonds (vertical axis). High interest rates relate to current perception from the market of the borrower’s risk. That perception changes over time. The countries listed in the previous link are on course for their interest rates to go up as well.

We haven’t heard the end of debt issues for many countries including the US. It appears to be complicated … the politics are when different sides have different solutions. The problem itself is just as simple as household debt … spending needs to be cut so dollars are made available to pay off loans (debt). More income? Where do those extra dollars come from? They come from GDP. GDP dollars can not be magically invented unless the economy grows so that GDP grows. Solutions can’t be based on wishful GDP; only based on real GDP as it exists today.

My point: economic growth globally may well be stunted for many years to come as governments try to get themselves back on even footings between spending and borrowing. It remains to be seen whether people will have enough money for themselves which would be good for company profits and the markets, or whether one of the solutions by government will be to increase taxes which would take money out of people’s pockets for spending.

Note the tabs are interactive in the graph below.

Source for Polarized Prospects for a descriptive text that accompanies the interactive graph above.

Economics in One Lesson
Why aren’t more blogs about investing?