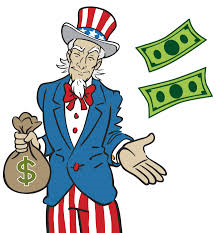 Many people get confused when they invest in mutual funds, either indexed or actively managed, when they haven’t sold any of their shares, yet they get a 1099 that says they have Capital Gains* and their tax preparer says they owe taxes on those gains. How does that happen?

For clarity, this comes from investments that are not titled as a 401k, 403b, IRA or Roth# for example; instead, they’re titled in the owners name individually, via a Living Trust, or as joint owners or as community property owners. Why would anyone want to invest and not have tax-deferral? Because using the money, from what are called Qualified or retirement plans#, before age 59 1/2 means not only paying the deferred income tax, but also a tax penalty! So, investing outside of retirement accounts allows you to have returns (or losses) AND the ability to take the money out of the investment before 59 1/2. Thus, there are reasons to invest outside of qualified and retirement plans.

So people put their money in savings accounts, instead of investing in mutual funds, thinking they’re avoiding taxes. Well, yes – savings accounts don’t have gains, but they are taxed on interest earned. So taxes may be less – but, usually because returns are also less.

So understanding why you owe taxes when you didn’t take any money out may be confusing. Bear with me and hopefully you’ll be less confused in a few short paragraphs.

U.S. mutual funds are required by law to distribute realized capital gains to their shareholders. You don’t want them keeping your money would you? From Wikipedia on this: “If a mutual fund sells a security for a gain, the capital gain is taxable for that year; similarly a realized capital loss can offset any other realized capital gains. Scenario: An investor entered a mutual fund during the middle of the year and experienced an overall loss for the next 6 months. The mutual fund itself sold securities for a gain for the year, therefore must declare a capital gains distribution. The IRS would require the investor to pay tax on the capital gains distribution, regardless of the overall loss.” The overall loss in the scenario would be from the markets going down after you got into the mutual fund. This is called pass-through which means the money made is used to buy new shares of the mutual fund and thus you as a shareholder have benefited just as if that money was instead sent to you directly and then you used it to buy those mutual fund shares. You owe tax on that income benefit. If you owned the company stock and sold it yourself it would be the same result.

So the above is a realized gain as a result of what the mutual fund does with your money on your behalf – why you invested in the first place.

You need to understand that there are two origins for potential gains – ONE from what the mutual fund does and the SECOND from what you do.

Nothing is certain but death and taxes.

PS. Dividends are taxed too, but this come from income the mutual fund receives as a result of owning company shares that pay dividends. If you owned those shares directly and received the dividends directly, you’d owe taxes just the same.

Note: The above is not meant to be tax advice – simply to clarify why you may be told you owe tax on your mutual funds.

*Under current tax law, long term capital gains are taxed at a lower rate than the “ordinary” income tax rate that you pay on earned income.

**Basis or cost is tracked and reported, because you’ve already paid tax on the capital gains (and dividends) you have received, so you do not pay tax twice.

Stock Market History: A Crash Course For Investors Pt 4 @investsensibly
Do It Yourself (DIY) Investing?