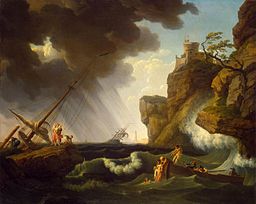 Gone are the days of work, golden watch and retirement with a pension. Few companies offer pensions today and government workers are also being shifted to retirement savings plans where they contribute instead of being solely employer based.

Longevity was shorter when pensions were the rule so the pension plan was on the hook for fewer years. Fast forward now – people live longer and the employer is shifting the risk to you the worker. The economy is more mobile and competitive and workers aren’t as loyal to employers as in the past.

The problem is that people envision their grandparents retirement when that is not the reality today. Retirement in the past was the final chapter – now it is a whole new phase in life. A phase that has many different solutions for people: continue to work, cut back on work, delay retirement, not retire at all are options people have.

Are Boomers Headed for Retirement Disaster? by Michael Finke, Think Advisor March 31, 2014 brings up a good point about people who don’t seek a financial adviser as being at most risk of a retirement expectation surprise. Finke discusses why low earners are the most at risk for retirement with reliance on Social Security being their main source of income. Fortunately, Social Security may represent a higher percentage of income replacement for this group of retirees.

Finke says hit harder would be the higher income group who simply are not saving enough. They have the income to afford seeing an adviser – and should in order to avoid having to work their entire lives (assuming they’re not in the group with health issues preventing further work). “Simply going through the process of figuring out how much they have and what they’ll need forces them to face reality.” “The best prescription for preventing the wreck might be a well-placed warning flag.” In other words, simply living in blind bliss increases the odds of not being able to retire.

Retirement Income for the Wealthy, Middle and Poor … summary by Michael Kitces of a research paper by Meir Statman.

Quoting Kitces’ summary of the below graphic – where the concern is really on the Middle earners (Wealth have enough resources and poor get most of their income replaced by Social Security). 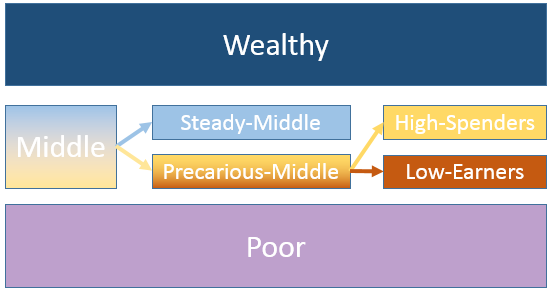 “The primary segments that Statman suggests in his article are the Wealthy, the Middle, and the Poor. The Wealthy are those who are able to earn ample income during their working years to save more than enough to fund a comfortable retirement; their retirement concerns (in Statman’s view) will revolve primarily around issues like estate taxes, and status competitions with their wealthy neighbors. The Poor, by contrast, are those who are unable to earn adequate income to save enough (or at all) to fund their retirement.

In the case of the Middle, Statman breaks the category into several sub-groups. At the top are the “steady-middle” who earn adequate incomes to steadily save throughout their working years for their retirement – perhaps not as lavishly as the wealthy, but enough to achieve a comfortable retirement. At the lower end of the Middle are the “precarious middle” who might be close to funding their retirement but are struggling to save enough.

Moral of the story: Understand which group above you may be in. With that understanding comes a realization about what you should expect and what you may do to change your fate. Woe-is-me really applies to those precarious middle earners who are high spenders. Live within your means – means not only spending no more than you have (reducing reliance on leveraging your standard of living with debt) … but also … saving more so you can sustain your standard of individual living without having to rely on others (employer) eventually. Relying on others is the retirement disaster!

academic research, behavior management, control, how much do I need to retire, outlving resources, prudent plan, standard of individual living, when can I retire

How do you picture retirement?
What does making extra mortgage payments REALLY do?