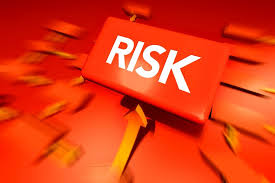 If you are not measuring, you’re likely guessing.

Perception is influenced by what one sees or feels. Retirement feels risky at times. How might that risk be thought of? In other words, how might the feeling-of-risk side of the brain work with the rational side to work through retirement fears?

In the retirement planning realm, a Monte Carlo simulation may be performed and illustrated. The perception is that something has been predicted by doing this process … that you may take so much per year in income with a 95% percent confidence in success for example. This simply means that 95% of the simulations outlasted the period selected. What of the other 5%? They did not reach the end of the simulation period. However, some of the 95% also went way beyond the period too (or they had big balances at the end of the period)! So nothing has been predicted; simply that that if markets do well, then there will be lots of money left over at the end, and if markets don’t do well, then money runs out before reaching the end. And here’s the but … you don’t know which track you WILL BE on, a do-well track or a don’t-do well track, until you get there. For example, all Monte Carlo simulations had good and bad tracks in 2007. Then along came 2008 which was one year of bad. Since 2009 tracks have been good again.

So you might ask … some people may want to spend that extra money during their early retirement years since 95% of simulations in the example above most likely have money left over (rather than leave it and not reach the end because the passed away before then). Can spending more early be done? Yes. Recognizing that this still depends on the unknown markets of the future. In other words, it is possible to pull money into the present years to spend, however, this means that this reduces your portfolio balance, so there would be less to spend later (regardless of what the markets do because the future portfolio values would be relative to each other given the same market returns going forward). This strategy is okay and may be measured (our papers refer to this strategy as “consumption-orientation” as opposed to a default “bequest-orientation” that is baked into the 4% rule approach).*

This said, this is the purpose of an annual review … to re-run simulations and review what has transpired the past year and what is feasible the coming year. A single simulation plotted out APPEARS to allow a set-and-forget approach. The annual review actually plots which of the prior simulations you are actually tracking. Here’s some visuals on this to help your perspective along. 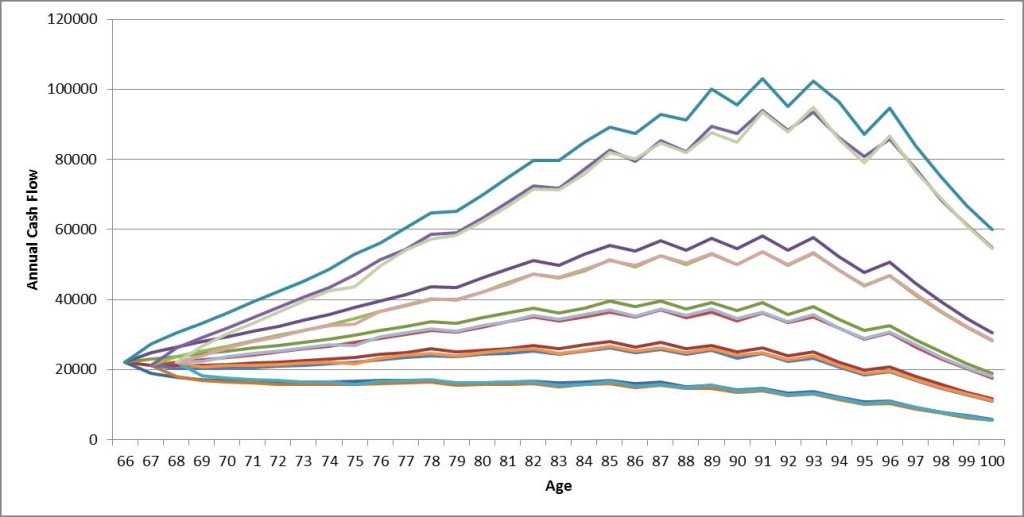 This is a hypothetical retiree in their early 60’s with a balanced (50/50 equity/bond) portfolio. The purpose of the illustration is to discuss the broad strokes of the concept of stringing simulations together so they are serially connected and annually recalculated. What this graph does is to step the retiree through the first 3 years of retirement … you see 3 Monte Carlos simulations superimposed on each other at the left end of the graph. (The upper two groups of lines represent the “good” market sequence series within the simulations, the middle set of lines are the median simulations, and the bottom two groups of lines represent the “poor” market sequences). 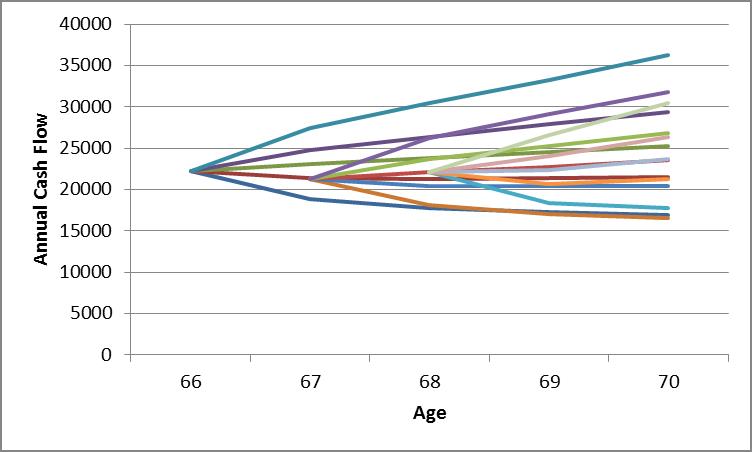 The second graph zooms in on the first 3 annual reviews by showing how the simulations may change simply by aging a year and having a slightly different balance due to taking money from the portfolio and market return effects on the balance. The retiree is now 68 and the unknown future begins there. The past is known and is represented by the red line connecting ages 66 and 67 to age 68. Notice that the annual spending amounts do not change by large amounts during normal (median) markets (a change may not be required if portfolio value changes are modest) … see PS below. More, or less, spending may be possible given other market circumstances as well as how much you spend in addition to what may be sustainable in any given year.

The illustration above assumed market returns were less than “normal” by a slight amount so that the first spending point was slightly less than the first. The third spending point returned to that of the first year. Depending on your spending adjustments (what you can control) and market returns (what you can’t control) determines your outcome for the next year. Guess what … this is how it worked when you worked too. If you spent more than your income in anticipation of the bonus or pay raise (increased credit card debt for example), you were slightly less well off paying off that debt (and even less well off if the bonus or pay raise didn’t materialize as expected). In retirement, if you spend in anticipation of up markets that don’t materialize, then your portfolio balance is less and temporarily reducing spending is required (equivalent to paying off the credit card debt).

Cash flows taken, or not taken, today do affect future portfolio balances. Understanding those future effects leads to prudent decisions today. It is that way before you retire … and it remains that way after you retire. The graphs above look at just the first 3 years of a retiree’s retirement. Our research looked at the cash flow and portfolio value relationship of ALL of the retirees’ lifetime years (using Period Life Tables) all strung together where following years are dependent on prior years … just like how real life works. In other words, how past and present decisions affect your future choices.

The main point of the discussion here is that running a Monte Carlo simulation is more about what it says about that specific moment in time the simulation is run … NOT about what the future range of possibilities are. Notice that the further out you go, the wider the range of uncertainty. An annual review today, that updates your age and portfolio values, looks at what you may consider prudent today; it says little about what you may or may not do in the far future. (Models that predict what you can do in the future don’t exist). You need to wait until the far future arrives to decide what to do then. Guess what … that is how life has always been. Ever hear the expression “The best laid plans of mice and men?”

*For a graph that shows a single set of simulations (rather than 3 superimposed) and further discussion on annual reviews please see Part 1 (includes links to the research that describes the methodology). If you refer to a Period Life Table like one from Social Security Actuary, and choose an ending age that is older than your expected longevity age, then you are “bequest-oriented” in that you expect to live longer than that and wish to “push” income into those later years. The “consumption-orientation” results from choosing an age younger than the expected longevity. There is no right or wrong choice between which orientation you wish. However, understanding the difference may help you avoid being in either one unintentionally. Different tables may have slightly different ages based on the population measured in the table (healthier people would have longer expected ages for example). The goal is to match the table to the group you believe you belong in. In general, older life expectancy ages means longer distribution periods and thus slightly lower withdrawal rates for income off of your portfolio relative to younger life expectancy ages from a different table. Research links at end of Part 1 go into more details.

Different allocations and different spending objectives would produce different results. However, the concepts would remain the same … that an annual review and discussion are important throughout retirement to keep spending within the realm of prudence given what markets and the economy are doing each year in the future. Probabilities of the Portfolio should be considered in conjunction with the Probabilities of the Person.

As I stated at the beginning, if you are not measuring, you’re likely guessing.

PS. Increasing spending appears to be an easier decision based on good markets. Poor markets tends to paralyze thinking due to emotions. What is a rational approach to decide when a slight reduction in spending is prudent? This blog on recognizing signals that suggest temporary reductions are in order is based on this published research.

Just what should an annual checkup do for you during retirement?

Just What is Financial Planning?
How to prepare for a Good End

2 Responses to Just what should an annual checkup do for you during retirement? (Part 2)