I discuss in detail the analogy of ocean waves to visualize retirement planning in this blog post. 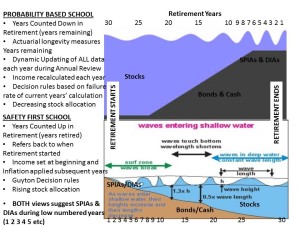 Rather than writing a description of the two, here’s a graphic that illustrates that both schools are talking about the same ocean (ocean analogy explained more). They simply are viewing it from different parts of the ocean.

The difference primarily is when do they envision the “surf zone” or the low numbered years of retirement? How to address those surf zone years is not in dispute – use of Single Premium Immediate Annuities (SPIAs) and/or Deferred Immediate Annuities (DIAs). Most in the profession view application of these during the early years of retirement (bottom segment of the graph, and numbering at bottom, representing safety first view). Others, including myself based on lifetime expected cash flow analysis, view application of these as an option to be made later in retirement (upper segment of the graph, with numbering at the top, representing probability based view).

Another difference between the schools is whether stock exposure should rise or decline during the retirement years. Again, research supports either view – differences primarily due to simulation design, assumptions and data interpretation.

How are actuarial lifespans calculated and applied … at the beginning of retirement using a conservative age less likely to be outlived (i.e., a safe fixed period), or each year with a new reference to the life tables to recalculate the probable time now left in retirement?

What is the reference point for decision rules about when income may be increased or possibly decreased, based on market and spending patterns … with reference to a past point (Guyton), or with reference to the present calculations’ percentage of simulations that fail the calculation (hint: higher failure rates signal spending that’s probably too high)?

Basically, the Safety First School continually refers back to the beach as its reference point (bottom view) as one makes future decisions. The Probability Based, dynamically updated, School refers to how long until one reaches the beach (upper view).

Notice that the application of insurance products that insure income such as Single Premium Immediate Annuities (SPIAs) and/or Deferred Immediate Annuities (DIAs) are applied at opposite ends of the retirement spectrum, when the numbered years are in their low values (recall that the top and bottom numbering of the graphs are in opposite directions). Those are the years viewed most at risk but they are at opposite ends of retirement because of how either views where one is at the beginning and where they end … in deep water going towards the shore? Or from the shore going into deep water? The differences emerge primarily how either school views sequence risk and how to manage it.

Thus, visually from the graphic above …

1) Counting retirement years up: is the retiree mentally moving from the beach (safety first) into deep water, and can they emotionally adjust from shore to deep water differences once they’ve aged?

2) Counting retirement years down: is the retiree mentally moving from deep water (probability based) towards the shore as they age?

However, understanding the fundamental differences is important.

Note: It is unlikely one would reach very low time remaining numbers from the life tables because one always has an older expected longevity age and time frame based on current age. Explained a bit more in this paragraph from linked blog post: “Notice in Figure 4 (of linked blog) that the initial expected retirement time period at age 60 is 33 years (couple of the same age using Annuity 2000) – yet when the retirees reaches age 93, there’s still a possibility of 11 more years! The longevity table at the bottom of Figure 4 shows the percent of cohorts expected to outlive (i.e., percentile) time periods at those ages. For example, 50% of cohorts may expect to outlive 33 years at age 60, while once at age 93 20% of those cohorts may expect to outlive another 11 years (as couples). Again, life tables for individuals are different and would apply when one of the couple dies, or would be used immediately if the person were single. The time periods would be shorter, so withdrawal rate and cash flow would be higher relative to couples. Males would compare “better” to females for the same reason (do you want more money, or more life?).”

Women and their Retirement Savings
“Your Kids are Ruining Your Retirement”

7 Responses to Summary: Two schools of thought on retirement income.